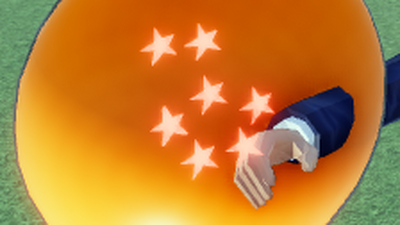 Dragon Ball appears to be an orange ball with visible six stars but should be seven stars depending on your avatar. Individually, they have no powers, but united they have the ability to call forth their associated Eternal Dragon who can grant one wish. Obtained through treasure chests with 1...

Btw also trading 3 dbs, Made in heaven and Chroma

All of this together for something

I hate AUT now. I had road to strongest quest almost done, and i only had to block dmg.... BUT NOW THE DUMB GAME UPDATES, AND DOES A NEW QUEST THING, AND I LOSE MY PROGRESS ON THE QUEST. ALL MY DBS ARE GONE, AND SO IS THE QUEST. this game sucks.

So some bitch offered me 6 dbs for broly. Was that worth, i asked on discord and someone said yes. so i scroll to see how many he gave me... HE TRIED GIVING ME 3. I was pissed

This dudes trading 2 dragon balls for nocturnus, is that even fair?

When talking to Shenron after getting all 7 Dragon Balls, wish for "Forever Fused" to achieve Gogeta. Gogeta is also needed to achieve Vegito.

"Revenger" - When any player within your server on your friends list dies, you will deal x2 damage to whoever killed them.

M2 - You do a sledgehammer down onto their head, dealing 45-50 damage and block breaking.

E - You do a pose, and when hit, you will redirect the hit and kick their face, sending them flying. 20 damage, frame 1-2 startup, 0.5-1 second endlag if whiffed.

R - You do a mini-barrage and then a kickflip, jumping up and firing a Kamehameha after. 60 damage, unblockable.

T - You charge a Soul Punisher and throw it, sending them flying backwards and dealing 50 damage. Blockable

F (Super Saiyan 4) - You charge a Big Bang Kamehameha and fire it, dealing 40 damage. If held, you charge another to fire again.

E (Super Saiyan 4) - You stand still for 2-3 seconds. Any attacks sent to you are bypassed and you are hit, dealing 20-30 damage. 1 second endlag if whiffed, combo extendable, 0.3 second startup

R (Super Saiyan 4)- You send confetti at them, as the victim gets scared. You then gut-punch them, insulting them. This puts all moves on a 10 second cooldown and deals 30 damage.

(edited by Username The 5th)
Dragon BallStands and Specs