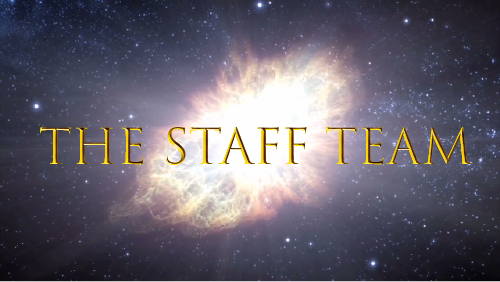 A Universal Wiki's staff consists of six levels of ranks, ranging from Rollbacks to the Head Bureaucrat(s). Being part of the staff of Roblox AUT gives users a special ranking on the Discussion forums, which allows them access to the AUT Wiki Administration forum, where the inner workings of A Universal Time Wiki's activities are discussed.

What the A Universal Time Wiki looks for in its staff is a willingness to contribute meaningfully above all. Expert knowledge of the wiki's templates and style is one of the most major points of consideration for users to move up to the Rollback level, while users are strongly encouraged to be more than just contributors. Respect, common sense, humor, formalness, grammar, and reputation are important as well.

It is highly recommended to go to the AUT Discord for any further inquiry.

The following are AUT Wiki's staff members in order of rank. Other than exact rank, no user listed above another (unless otherwise noted) is of a higher rank than a user below them.

This user is the owner/creator of this Wiki, has all administrator responsibilities, can decide future development plans, and more. If you wish to report something, then you can't, since this user has created the Wiki and has been demoted by the FANDOM Staff a few months ago. If you wish to report something, report it to the other Staff Team of the Wiki.

Any people below in the tables are the Official AUT Staff Team. Both of these people have retired.

Administrators can officially block users and they can rollback edits made by a vandal. They have the powers of Discussion and Content Moderators. If you need anything, please contact them on their Message Wall, or Discord! They have optional color tags.

These are people who have the responsibility of keeping the AUT Wiki under Moderation so that no one will ruin the experience. Moderators will receive content or discussion mod role.

Staff that retired, left, got demoted, or voted out of the office.