A Universal Time Roblox Wiki
Register
Don't have an account?
Sign In
Advertisement
in: Landmarks, Islands, Locations,
and 4 more

There are many NPC's (Non-Playable Character's) In A Universal Time. They have different catagories; The Quest Giver (Mysterious Man and Goku Spec Giver{WIP}, Pucci/Ability Resetter, Black Market Guy (The Item Seller), Enemies, Bosses, Stand Storage, Akira (The Shop Guy), and more. Interactable NPC's are the one's who have a label above them and Enemy NPC's are the ones that attack you and drop items.

Gallery Of The Interactable NPC's

Pucci With The Ability Resetter Caption On The Tree (4th Map) 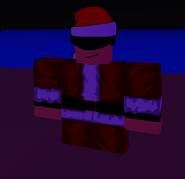 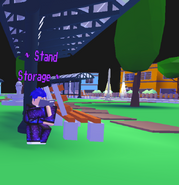 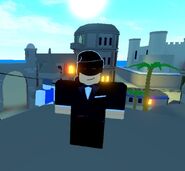 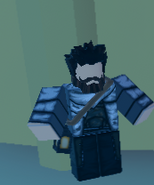 Gaster And His Dialogue

Epicflow203/Stand Storage In The New Universe 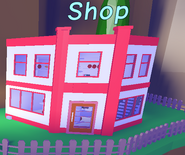 The Ability Resetter's Location in the 4th Map before the 5th Map was added Next To The Akira Shop.

New Locations for the Ability Resetter: In The Sand Area located next to Akira's Shop and At The Island Park.

Interaction With The Ability Resetter NPC:

Once you click on him, it shows two options; to reset your stand or not.

It shows Whitesnake in the background with a "Shh..." sign on Whitesnake's Face (Also A Finger).

If you say "Yes", WS appears on your screen, saying "It's mine." and proceeds to reset your stand.

If you say "No", the sign disappears and nothing happens.

Akira's Shop is located in The Sand Area Island of the new map.

Akira's Shop Location in the map before the new map was located next to Pucci (Ability Resetter).

Akira's Shop Location In The 3rd Map before the 4th Map was on a small hill.

Akira's Pose When He's In The Shop is Sitting and 2 Hands on The Table.

Item's and Specs You Could Buy When You Click On Akira: 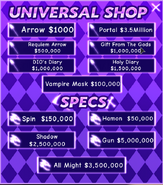 Black Market Guy's location in the 3rd Map Update before the 4th Map Update was in the middle of the map.

Black Market Guy's Location in the 4th Map before the 5th Map Update was in front of Akira's Shop under A Tree's Shadow.

Black Market Guy is located in the main island of the new map. He's near the AUT Cafe, where the stand storage guy is.

The purpose of Black Market Guy is to sell item's you don't need and get cash in exchange.

Items You Sell For Him: 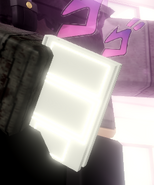 The Stack Shop NPC is an NPC of where you can buy items using stacks, a currency you can get every 30 minutes.

Note: You won't get Cursed Orb from rejoining. It only works by refreshing the stack shop by buying the "Refresh Stack Shop" product or be patient for a Cursed Orb to appear in Stack Shop.

Fun Fact: The reason why he plays DIO's Amendment as his spawn music is because his name is "Satan Santa".

The Song He Plays when he spawn's is DIO's Amendment.

Items you can buy with stacks.

Gaster (The Man Who Speaks In Hands)

Gallery Of The Items Buyable From Stack Shop 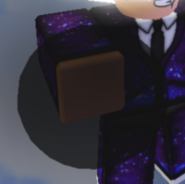 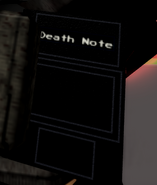 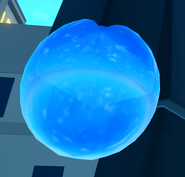 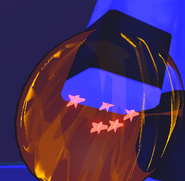 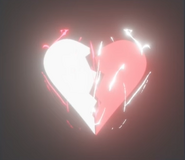 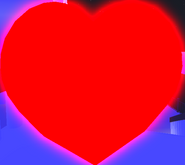 The Peaceful Dummy is a Infinite Health Dummy designed as a Megumin Dummy. 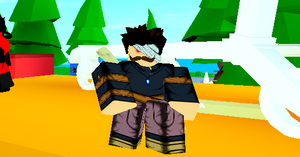 The Kur_Dev Dummy was a dummy dancing on top of Akira's Shop. It doesn't exist in the Recent Map update. This dummy can be glitched of dying and also takes damage. 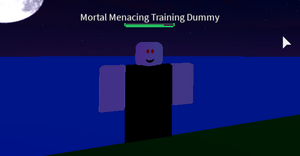 The Mortal Menacing Dummy is a dummy that looks exactly like the Menacing Dummy but with Red Eyes and take's damage. It's temporarily removed from the recent map.

The X-Chara Dummy is just a leak of X-Chara's Move. It no longer exist's anymore.

The Brody Foxx Dummy is just a Yo Mama Joke Dummy that tells The Yo Mama Joke's. He takes damage and exists on the middle of the new map. 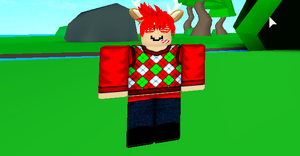 Christmas Akira Dummy is just a Akira Dummy but Christmas Version. It takes damage but it doesn't show it's HP Bar.

The Pickle Rick Dummy is an Infinite Health dummy and just an meme dummy to attack. 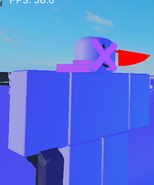 Brody Foxx Laying Down On The Colosseum

Note: A boss' health increases with the amount of players in-game; plus, you can spawn them by using the products.

Brando spawns every 20 Minutes, and says something that can easily be heard throughout the server (I don't know what he says, but it's along the lines of "I, Dio, am the pinnicle of life!")

Brando has a total of 6000 (6K) Base Health. He can easily be defeated by the user of a stand using an overpowered one, like Dio's The World, Dawn, Star Platinum Requiem (SPR), Shadow The World(albiet with minor difficulty) etc.

The System Alerts of When He Spawns:

In The New Map, he spawns at Dio's Mansion where the Sand Island is.

His Item Drop's when You Defeat Him:

Fun fact: If you're lucky, a glitch may trigger in which his items are stuck in the area you killed him. If he ever drops Water this becomes useful, as it's essentially an instant teleport into that area once you equip the item. Though this effect is uncommon and dissapears once you die.

"Heheheheh, I'll suppose I'll shall give you one chance. Soon, you will learn the true power of [The World]!" (Stardust Crusaders, 1989)

DIO is the main-antagonist of JoJo's Part 3 Stardust Crusaders and a boss that spawns every 40 Minutes(after it's death).

DIO has a total of around 7K Health Points That may increase depending on the amount of players.

Stands he can easily be defeated with are the same stands above.

Return To Zero can easily defeat him.

There was a bug but now it's fixed, I found DIO in the water behind the Colosseum .

DTW can easily beat DIO by using Barrage or slashes

You can also use Dawn since it does percentege damage with it's flames, but be careful.

System Alerts when he spawns:

Bald DIO (without an stand or bugged)

The boss that wields the powerful sword and spec, "Dawn".

Stuck is a Boss that was added on Christmas Eve, along with the weapon he holds.

He has a lot of Health, and doesn't get stunned. Using any other strong stands can decrease his health a lot, but it's not a guaranteed elimination. The best stand to use against him is Dawn itself. If not, then SPR is another alternative. You may also use a can of Sprite DB to one-shot him, but it is not recommended as you die and either leave the item free for the taking, or lose it via blasting it to space. For some reason DTW's percent passive has no effect on him and only deals pitiful damage against him, so DO NOT use it against him.

The item he may drop after getting defeated is the "Tales of The Universe", which is a 1/10 chance.

He is modeled after one of the developers, Stuck_Dev. He can also be found in the Cafe/Bar along with the other developers lounging in his chair.

Tales Of The Universe Appearance

Island's (島々) in A Universal Time are new Map Landmark's that can also be known as Map Extensions. There are 8 Of Them In-game. The Residential Island, Desert Island, ??? (P//S Lair, Space Monument, etc.), Cell Games Area Island, Brody's House, Morioh Island, Loot Island, and City Of Tear's. Information will made below. All of these islands will be removed once the New Universe update releases, The Only Island that's not getting removed is the Sand Island.

The Desert Island (無人島) is the island where Devil's Palm, Hornet Nest, Peaceful Dummies, and 3 Other Bosses spawn at. Colosseum, Akira's Bizarre Shop, and DIO's Mansion are also on the Desert Island. The NPC Gaster is also here He will give you the Gaster spec if you have all of his souls

Trello Description on Desert Island: "Island where the shop and other npcs can be found as well as the colosseum"

This section/tabber is for islands that will be removed in 'The New Universe' update.

The Residential Island (「レジデンシャルアイランド」) is an Island full of Large Building's, A Universal Time Cafe, and more. It was a very lage island back then when the 5th Map Update (Current Map) was released, and was used for NPC's, but it's size got decreased due to it being way too big. It also had Spawn Platform's on it, but, they moved to Morioh Island.

Morioh Cho Island (モリオ・チョ) is the current island where the all the Spawn Platforms are located. It's an Island that's also known as Hirohiko Araki's (Owner Of JoJo's Bizarre Adventure) Hometown, Sendai. For Some Reason, Sendai is named Morioh because using the real name would anger people, so Araki named it "Morioh". NPC's On The Island are: Ability Resetter, Stand Storage Guy, and Black Market guy. According to the anime, This is where Josuke lives with his mom, And where the radio "Morioh Radio" Is hosted.

The Loot Island (「戦利品の島」) is an island where all of them Item-Spawn Platforms are. It use to have the Ability Resetter NPC on it but eventually, it got removed for no reason, which ruin's Stand Farming.

The Cell Games Arena (セルゲームアリーナ) is an Island where most of the Peaceful Dummies are located, and most likely used for PVP's. It's pretty much useless since there's nothing to do there but do PvP.