watch 02:48
Wiki Targeted (Games)
Do you like this video?
Play Sound

The Ben 10 Spec is an upcoming spec in the New Universe used to replace some stands and specs which might not make it into the New Universe. Its obtainability is unknown right now but Kur has gave us some sneak peaks of it. It has been confirmed that there are going to be only 4 aliens with 2 moves + LMB. The 4 aliens which will be with the spec are, Diamond Head, XLR8, HeatBlast and Blitzwolfer.

The Idle pose of the Ben 10 Spec 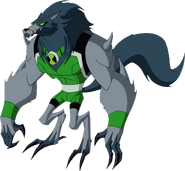 Blitzwolfer (the model hasnt been made nor animated yet)
Add a photo to this gallery
Retrieved from "https://a-universal-time-roblox.fandom.com/wiki/Ben_10_Spec?oldid=60498"
Community content is available under CC-BY-SA unless otherwise noted.