"The power of a god? I don't care. You're still Kakarot, and there's no way in hell you're going to fight alongside me!" —Broly

None (Not a Stand)

Broly is a spec which appears in the popular anime series, Dragon Ball. Broly is one of the two super Saiyans/Dragon ball specs, the other one being Goku. It is considered to be one of the best specs in the entire game, due to it's very high destructive power, powerful awakening move and versatile moveset.

Talk to Goku at the temple in the mountain where Gojo, StuckDucks, Killua, The Boss Altar, Dawn and Goku himself is and find 7 Dragon Balls. After you’re done, Goku will give you a quest named “Road To Strongest”. After you’re done completing the quest, Goku will ask “Oh you’re back, did you complete my request?”, select the “Yes” option, and Shenron will appear asking what you wish for. There are a total of 6 Options; Destruction, Power, Primal Power, World Ender, Wealth, and Ascension. Primal Power will give Broly. For info about what the options give, check the Shenron page. 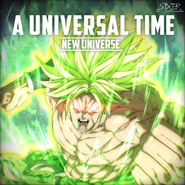 Broly next to an Meteor