A Universal Time Roblox Wiki
Register
Don't have an account?
Sign In
Advertisement
in: Stands, Canon, Evolutions,
and 4 more

"Within my body and my spirit, gravity exists! And it must also exist, at the end of it all...!" —Enrico Pucci

C-Moon (C-MOONシー・ムーン SHE-Mūn) is a Stand developed by Enrico Pucci, the main antagonist featured in Stone Ocean, the 6th Part of JoJo's Bizarre Adventure. C-moon’s stand power can turn Pucci into the center of gravity, allowing him to to manipulate gravity with his will.

C-Moon is the first evolution of Enrico Pucci's stand in Part 6, Whitesnake. It has features from, both the Green Baby, and Whitesnake.

C-Moon is a stand obtained by completing Enrico Pucci's A Way To Heaven Quest with Whitesnake, in order to complete the quest you'll have to kill 36 players using Whitesnake, kill DIO (Boss) using Whitesnake, and finally using DIO's Bone on Whitesnake (does not have to be in order)

Find and use a DIO's Diary on Whitesnake. 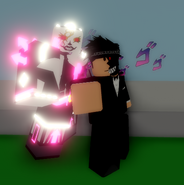 NOTE: C-moon really excels when stand off R and Y are used to extend combos. However, hitting those requires a lot of skill and is not true, so those will not be covered here.