Non-Canon, Original Ability made by staff

"The Grinch won't be the one stealing Christmas anymore..." —The Wielder of the Candy Cutlass

Candy Cutlass is a limited time edition spec that can only be obtained in the christmas event.

Gathering up 800 Candies and submitting the candies to the Santa NPC will give you Candy Cutlass.

Striped with red and white, the candy cutlass is a candy cane in the shape of a cutlass most commonly seen with pirates, it has a frozen tip with a red bow tie with leaves on the handle.

Blinding effect when the opponent is landed with CC's V move 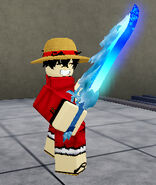