Crosshead is an non-canon stand that is shown as an admin/moderator stand in A Universal Time. Crosshead is an stand made by Alu_Dev, one of the Universe Resetters/Co-Owners of AUT, to symbolize a more demonic stand is one of the few admin stands you'll rarely get to see in-game. In a 1v1 you might as well reset your character due to all of its moves one shotting you or kicking you from the server.

Crosshead resembles as a tall-black stand.

Luna - Owner Of This Stand

Hipzoa - Only Other Whitelisted User

Ultimate Move : Endgame - The player press "8" Eight times Creating a Countdown starting from the Number 5:38. Once the countdown finishes the server crashes.

Crucify Smash - Press "E" to smash the target with a Giant Stone Cross, It will instantly Oof the target.

Removal Smash - Press "R" to smash the target with a Giant Stone Cross, but this time it will kick the target from the game.

Ban Smash - Press "F" to crash the Stone Cross on the head of the target resulting in a Server Ban.

Grab - Press "T" to grab the target in your hands similar to Gaster's awakened version.

Soul Drag - Use "T" to grab the target and then un-summon your stand with "Q", after the stand is summoned back the target should have disappeared.

Claw Crush - "T" + "Y" = After grabbing the target and pressing "Y" it results in the target being crushed in your arms with an instant death sometimes.

Speed Boost - Press "C" to boost your characters speed, it does not require Crosshead to be summoned in order to work. 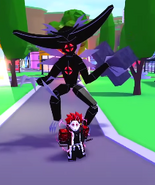 Sometimes the name appears as ☒☒☒☒☒☒☒☒☒☒.

This can only be obtained via Admin Arrow.

This is a stronger version of Awakened Gaster.