DTW is an extremely powerful stand. Despite its mediocre health, its damage makes up for it, which gives it an edge against stands that rely on their high health. Even though DIO (The user of this stand) doesn't have timestop movement, this stand can attack while in timestop.

Dio's The World is both a close-ranged and medium-ranged stand.

To obtain DTW the player needs need STW and a Cosmic Orb, use the Cosmic Orb on STW.

Dio's The World has a clock surrounded by bands at torso, red claws on both hands and a clock on head, he has glowing red eyes and seems to have neon red claws 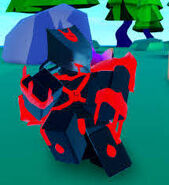 Dio's The World In Dawn's Aura

Add a photo to this gallery
Retrieved from "https://a-universal-time-roblox.fandom.com/wiki/Dio%27s_The_World?oldid=60810"
Community content is available under CC-BY-SA unless otherwise noted.