A Universal Time Roblox Wiki
Register
Don't have an account?
Sign In
Advertisement
in: Unobtainable, Stands, Non-Canon,
and 4 more

"Do not mistake the kindness in me for weakness....." —Galizur

Galizur went from being Star Platinum to The World: Over Heaven.

Galizur seems to represent a crusader, a being who participated in any of the expeditions undertaken by Christian powers in the 11th, 12th, and 13th centuries to win the Holy Land.

Galizur can't be obtained in New Universe anymore, it can only be obtained through trading or giveaways.

Holy Pot Platinum is obtained by using a DIO's Diary on Galaxy Annihilator. 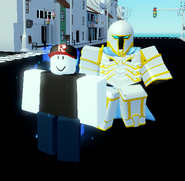