Blocking is a useful and important PvP Move. Opponents can block your attacks or you can block their attacks. Usually, blocking any moves in the old version of AUT would make you block forever, which was a bug. In the New Universe, there’s a block bar below your Health Bar, and everytime you block and get attacked by an move, the bar decreases. Any heavy moves can instantly break your block, and a somewhat fog or steam will appear when blocking. If the opponent uses any of their moves on your block, the bar will decrease and if the bar decreases successfully, you'll be stunned, giving your opponent the advantage to use their moves on you. After that, your Block Bar increases at a pretty high-rate. Your Block Bar doesn't increase while stunned. You can block an entire Timestop, but some moves will decrease your block bar as seen in Infernasu’s Recent AUT Video.

Made in Heaven blocking

Once you’ve dealt 100 Damage to the enemy, an random quote will appear next to the damage indicators.

When you're Low Health (below 100 or so), you'll receive a pretty blurry screen, your right arm holding your left arm, heart beat sounds, unable to sprint, and slows your walkspeed. You’re able to use any Self Heal move when you have Low Health.

The things you can't do when you're low health is:

Players stats showing how many 1v1 UCoins they have

When you press the gamemodes button, a list of 3 Game-Modes will appear. 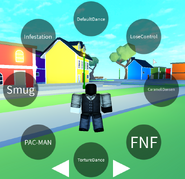 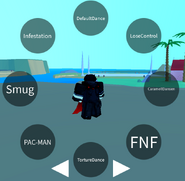 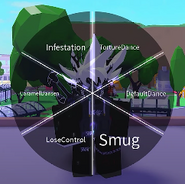 (Ryoji note: I will add gifs for all the emotes later dw)