A Universal Time Roblox Wiki
Register
Don't have an account?
Sign In
Advertisement
in: Undertale, Specs, Evolutions,
and 3 more

"Beware Of The Man Who Speaks In Hands....." —River Person

The Man That Speaks In Hands

W. D. Gaster was the royal scientist before Alphys, responsible for creating the CORE, Gaster's followers relay various explanations as to what happened to Gaster. One iteration says that he "fell into his creation," another says that "his experiments went wrong," and the last one says he "shattered across time and space." Characters such as the River Person and Gaster's Followers hint at his existence. Similar to Sans and Papyrus, he speaks in a typeface different from the other characters.

How to Obtain (Bugged)

You can attain this spec by doing the "Obtain Gaster" Quest from the Shadow Figure. The Shadow Figure is located near the Dojo. The quest is currently glitched and is recommended by many to not get as it is terrible in PVP. 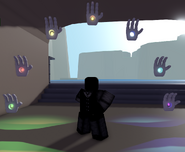 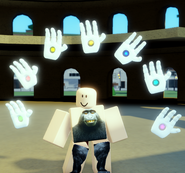 Tips and Tricks for Quest