"Power comes in response to a need, not a desire. You have to create that need." —Son Goku/Kakarot

None, Not A Stand

Son Goku (孫そん悟ご空くう Son Gokū), born Kakarot (カカロット Kakarotto), is the main protagonist of the Dragon Ball metaseries. Goku is a Saiyan originally sent to destroy Earth as an infant. Goku is a S+ Tier spec, along with Reaper and Broly. Goku is known as one of the strongest specs in-game and in the Dragon Ball series, as he can switch forms up to Mastered Ultra Instinct.

Goku is one of the Two Saiyan/Dragon Ball specs in AUT, the other one being Broly, as he can go Legendary Super Saiyan/LSSJ.

He was released and announced on December 25, 2020, but was delayed. He is now released in The New Universe.

Since Goku has evolutions and forms in each season, episode, or clip, he has 9 Forms in-game, and they are:

To obtain Goku, the player has to give 7 Dragon Balls to Goku (Note: Have them in your inventory to give to Goku).

He will give you a Quest:

After finishing the quest talk to Goku, Shenron will appear on your screen and give a few options for you to choose. (1, Destruction 2, Power 3, Primal Power 4, World Ender 5, Ascension). Power is the choice that will give you Goku. 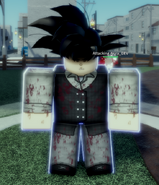 Goku in the Anime 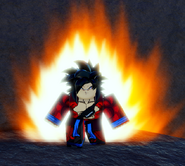 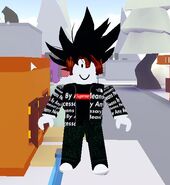 Drip Goku on a light pole

UI Goku in one of the old maps 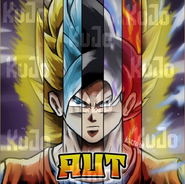