Hollow is a boss who appeared the AUT Halloween Update. It has 100% Health, same as DIO’s Health, but the health bar will decrease a bit slower then DIO’s. You need to do a minimum of 100 damage to him to get rewarded. His former health was 1,500, though it has been decreased to 1,000.

The Hollow boss can only be summoned by with a Cursed Orb at an altar. Unlike Umbra, it does not need a "Tales Of The Universe" too.

Hollow spawns by rising from the ground and flying into the air, a white streak forming behind him as he flies up. After a short while, he lands on his feet.

Hollow is much larger than an average R6 Robloxian, as shown in the gallery below. Hollow wears a skull on his head and sports black armor with gold indents, along with a black cape that has yellow outlines. Held in his right hand is a large scythe with two golden spikes at each end and a metal blade with dark gray areas on top of and in the back of the scythe blade. 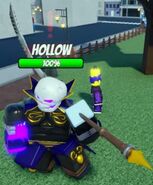 Hollow next to EpicFlow, the Co-Owner/Universe Ruler of A Universal Time