"Killer Queen can erase anyone at any time. For, you see, Killer Queen's power is to turn anything it touches into a bomb." —Yoshikage Kira

Killer Queen (キラークイーン Kirākuīn), is the stand of a Japan Serial Killer in the small town of Morioh Cho named Yoshikage Kira in JoJo's Bizarre Adventure, Part 4: Diamond Is Unbreakable. It's ability is to turn anything, like a 100 yen coin, into a bomb. Since Killer Queen shares no emotions, it is a serious stand to inspect.

In Old AUT, KQ was removed due to having assets from A Bizarre Day in its coding, so it had to be removed. But since it was removed, its 2 evolutions stayed in the game, but were unobtainable because you couldn't get Killer Queen anymore.

Killer Queen is obtained by using Stand Arrow on Standless.{Chance}

The stand is a humanoid stand , but its head looks like a cat, this has a meaning though, because its stand user, Yoshikage Kira, wanted to have a quiet life with no interruptions, just like a cat, living its life. Killer Queen has no gender.

It has gloves with its iconic skulls on them, including Killer Queen's shoulder pads, tt has a cat like face, but it doesn't really have any emotion, It has a cloth around its hips, within the middle of the cloth, it has its iconic skull’s, face, its pink, and it has red eyes with purple pupils, It wears sandals.

Killer Queen is all round stand that feels great in both long and short range giving high presure on opponents with its controllable Bubble Bomb and Sheer Heart Attack with an opportunity to deal 200+ damage combos and heals itself from heavy injury, making this stand a great option for players that love rush down characters. 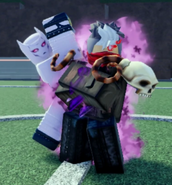 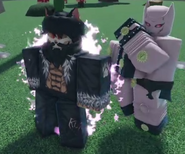 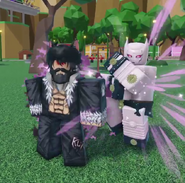 Killer Queen's quote: "You have to cut my nails with these nail clippers.". 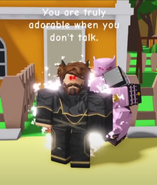 Killer Queen's quote: "You are truly adorable when you don't talk.". 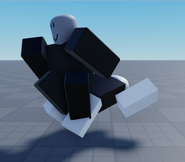 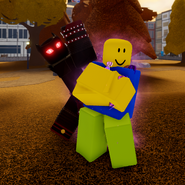 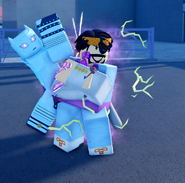 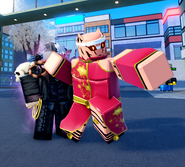 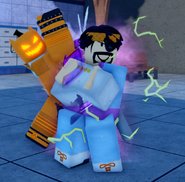 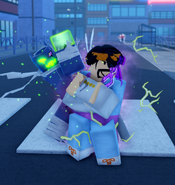 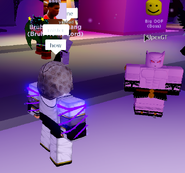 Killer Queen in the Old Universe.