"I'm so tired of killing... I just want to be a kid. Hanging out, doing stuff with Gon. That's it." —Killua 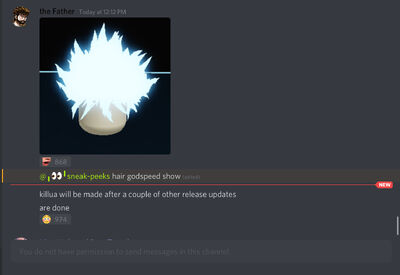 × Naturally being the heir to the Zoldyck throne means being subjected to intense training and torture. Due to your incredible reaction time, you have a 15% resistance to projectiles, alongside having an immunity to any debuffs that deal damage over time because as said in the anime in one of the first episodes he is immune to poison and possibly other stuff.

× Passive only stays active while inside of your "Godspeed" mode. You have an increased walkspeed compared to other stands or specs, preferably the fastest walkspeed. You also have increased jump height.

× Upon pressing Q, you will gain a dark black aura and a special decal. The screens of everyone within a 15 stud radius of you turns darker. All of your moves gain a 15% damage increase. Additionally, moves that usually have an in-between (such as LMB) will completely skip the in-between to provide the effect of god-like speed. The effect lasts for 15 seconds, and has a cooldown of 45.

× You dash forward and slash forward with your nails, revealing their incredibly sharp and pointy nature. The initial slash deals **__20 damage__**, but when it lands on the opponent, the action of multiple slashes appears and an additional **__40 damage__** is dealt alongside ragdolling the opponent.

× For a moment, you stand still. After a second, you protect yourself by rapidly swinging a superalloy yoyo around yourself. Anyone that gets within 5 studs finds the yoyo chucked straight to their abdomen and launched back, being dealt **__80 damage__** in the process. If hit by a physical move, the same applies, effectively not only making this an attack but also a counter. Move will last for a total of 5 seconds, depending on if you hold it.

× This move can only be used whilst Otherworldly Aura is activated. Instead of using yoyos, you'll lean forward and rapidly chop and slice in the direction you're facing for 2 seconds. During this, you are stationary. Effectively acts like an uncancellable barrage, deals **__120 damage__**.

×  You'll begin the attack with a kick to the side. If it lands, you'll suddenly reappear behind the opponent with your arm jammed straight into their back. The move deals **__80 damage__** and ragdolls the opponent after the 2nd attack.

× The attack begins with you leaping up and kicking the opponent with your left leg. Once the move lands, you'll place both palms on the opponent's chest and use your Nen to shock them with electricity, sending them back a bit. Lastly, you reappear behind the opponent as a cracking sound plays and they are ragdolled, their head turned backwards. The entire attack deals **__80 damage__**.

× Requires you to be moving to use. As you continue to move, you begin creating 9 after images that appear from your right and left side. While the after images are present, you can "swap places with them" by holding the direction in which you want to change (A and D) and tapping Y. This instantly swaps your places with the after image in the spot you changed to, effectively allowing you to quickly move away from attacks before they land. This goes without saying, AoE moves will still deal damage, and once damage is dealt to you, the move ends instantly. The "start-up" is 2 seconds long and the move lasts for 9 seconds. As stated, if a move does land on you, the move will end immediatley.

× Using this move allows you to enter the state of "Godspeed" changing your moveset whilst inside of it. The mode will last for 40 seconds, before entering a 2 minute cooldown. You may not cancel Godspeed.

× This move can only be used whilst Otherworldly Aura is activated. You quickly dash forward leaving behind dark after images. If you make contact with a person, you'll stop in your tracks as a red hole suddenly appears on their chest. You drop a bag and reveal that inside the bag is the opponent's very own heart, who drops down to the floor and is dealt **__110 damage__**. If the move is used on an opponent at 20% HP or lower, it will instantly kill them. However, this move has a 1.5 minute cooldown to counteract this.

× First you deliver a side-kick to the opponent. Next, you knee their chin with your opposite leg. You follow up the attack with a flurry of punches to the face and finally an uppercut. The whole attack slowly brings you a few studs off the ground as long as the attack is continuing. The move requires you to press LMB 4x in order to do. The move deals **_40 damage__** total; while miniscule in comparison to other moves, is made up for with it's very low cooldown and ability to stun the opponent.

× You spin around and elbow the opponent straight in the gut, dealing **__60 damage__** and strong knockback. Low cooldown.

× You hop up in the air a bit and kick the opponent on the side of the face using your heel. If used in midair, it suspends you shortly. Deals **__40 damage__** and knocks the opponent back a set distance (10 studs). Best used right after LMB, as the move has 0 start up and is incredibly quickly.

× You jump high into the air (25 studs) and point downwards. A large thunderbolt comes down from your arm down into the ground, creating a 5x5 stud AoE circle  wherever the lightning bolt lands. Anyone that makes contact with the AoE circle is knocked back, dealt **__65 damage__**, and given the "electrified" debuff. This cuts their movement speed by 45% as well as deals 0.5% of their HP over the course of 3 seconds. If the opponent hits the thunderbolt itself, they will instead be stunned completely instead of being knocked backwards. Like R, it leaves you suspended in the air.

× Again, you begin the attack with a spinning kick. However, when you place your foot on the ground again, a small circle made out of electricity surrounds you. Whoever enters the circle has part of their face suddenly destroyed cleanly off, regardless if they stepped in it willingly or if the circle was made right next to them. Deals **__90 damage__**. You will be stuck in the circle for 3 seconds, so use wisely as  it may cost you your life.

× This move is cursor aimed and acts similar to Samurai/Yasuo's F. With your cursor aimed at the opponent, you'll dash to their location and kick them into the air. What follows next is a series of incredibly quick punches and kicks from you, both in sets of flurries and in sets of "jabs". The entire onslaught from you lasts for 5 seconds, before ending with a kick that grounds the opponent. The whole move deals **__around 220 damage__**, but has a range of 15 studs. Long cooldown.

× You charge forward 10 studs. If the move lands on the opponent, you'll continue to charge whilst rapidly punching the opponent, leaving behind trails of dust and debris. After 2 seconds, you begin to attack the opponent while moving in a circle, slowly moving towards the center and finishing the move with an uppercut. Deals **__100 damage__**

× You disappear suddenly and gain a 110% increase to your walkspeed for 3 seconds. Once 3 seconds end, you make a 10x1 trail of dust behind you. You cannot attack while hidden.

× You "teleport" 10 studs in the direction you're facing