All of the NPCs ingame as of now:

The Tutorial NPC is one of the many NPCs in AUT. This NPC, if you talk to him, will lend you some useful information, especially if you are new to the game, to find out how to play it. When you talk to the NPC you have 2 different choices you can go with; first one being,

Where which he replies with -

"There's Many Places To Explore. The Places You Visit Depends On Your Goals, You Can Try And Find Treasure Chests Around The Map They Spawn Oftenly And Include Upon interacting with them 3.5K U-Coins and you earn 2 or 1 items from it if you're lucky enough you could find something very dark(Cursed Orb), there's also the Devil Palm where you can obtain Saints Left arm and Hear and finally the eye there's also a mysterious bone that can be found there too."

The Second one is,

To which he replies -

"Well let's see... Most Abilities have a couple of keybinds for attacks, and you can block by holding [X], but you can't block forever. Some abilities allow you to attack even when they arent summoned, so make sure to check your keys whenever you get something new, you can also dash while blocking, most if not all abilities(Stands/Specs) has dashes as the [C] button, there's also certain moves that you can use but only when you're on low health."

The Stand Storage NPC is by far the most important and useful NPC in AUT since it lets you swap your abilities with other abilities. Normally players who just started the game in the New Universe will have 6 storage slots but OG players from old AUT will have 3 more additional slots for being OGs.Some of them get it due to losing their Stands / Data.

Master of shadows, the one who only goes by the name "Him" can be found in the forest leaning beneath a tree with his arms crossed. Upon talking to

him he will reply with,

"Get Out Of My Sight"

However if you have the stand Shadow The World he will say something different,

"Hmph. You have quite the unique ability - but it has yet reached its potential. Turn to the path of the 'Shadows' only then will you achieve greater heights."

Doing this will give you the Quest, "Shadow's Demands"

The DIO NPC can be found atop the mountain near the football field where meteors mostly fall. Talking to him with Star Platinum will give you the "Creation Of The Cosmos" Quest or better known as the Sol Quest, while talking to DIO with The World will give you the Nocturnus Quest.

Creation Of The Cosmos :-

The Jotaro NPC can be found leaning behind a tree. If you talk to him he will say the following line,

"Hey, I'm Jotaro Kujo, a stand user. If you have a stand like mine, I can train you to evolve it."

If you agree and press the option "Ok." he will reply with the following,

"Well, you're going to need a stand like mine, and a form of payment. I left something precious to me around here somewhere, maybe if you had that..."

You then will need to talk to Jotaro with Star Platinum and the "Mysterious Hat" item in your inventory to get the quest for Star Platinum: The World.

The Killua NPC was added in the Killua update, you can find Killua in the beach chilling under the sun. If you talk to him he will say the following,

"Assassination is a key aspect that's held at high regards withing my family. Do you wish to be a successor of such tradition?"

If you agree and say yes he will say the following,

"You'll have to mentally farm yourself in order to meet the criteria, still think you've got the mental capacity?"

If you say agree and accept it he will give you the quest and it is as follows,

Atop the mountain near the small houses can he be found StucksDucks is the NPC that teaches us how to become worthy of Dawn. Upon talking to him

he will say the following,

If you ask about obtaining Dawn with the item "Tales Of The Universe" in your inventory he will say the following,

"Heh, very well I'll teach you the ways, complete these 3 tasks and come back to me."

After you complete the quest he will say the following,

After that just climb the mountain and obtain Dawn.

Can be found right beside StucksDucks Gojo is a man who can control Infinity, if you talk to him he will say the following,

"Hello, what are you doing here?"

After that just talk to Gojo again and he gives you the spec.

The Super Saiyan from Earth, Goku can be found about on a cliff leaning on a tree, if you talk to him he will say as follows,

If you ask him how to become strong like him he will reply with,

"If you wish to become strong like me, first you gotta obtain all 7 Dragon Balls."

After doing these quests and talking to Goku a legendary dragon who goes by the name of Shenron will appear before you, he asks what you wish for and these are your options,

You see a portal ripped in space with eyes poking out... You go in and find the Maiden of Time Sakuya Izayoi, upon talking to her she asks,

"Do you want to get strong enough to be able to manipulate time as much as you want?"

Upon agreeing she gives a quest "Sakuya Izayoi"

Participant of the Steel Ball Run race Gyro Zeppeli can be found in front of the Devil's Palm leaning against a tree, if you talk to him with the 3rd act of Tusk unlocked he will say the following,

"You've drastically improved and fully demonstrated your brilliant resolve. However, you're still missing one final 'technique'. Bring me the 'Eye of Saint' and I shall guide you."

After agreeing with the Eye of Saint in your inventory, you will be granted Tusk Act 4.

Steel Ball Run race participant Johnny Joestar with determination full of darkness can be found in the Devil's Palm, with a spawn rate of 60% every 8 minutes. If you talk to him with Tusk Act 1 he

will say the following,

"I see that you've acquired a similar ability of mine from the Corpse Part. In order to improve your 'Abilities', you must hone your nails. To achieve mastery over nails, you must 'surf' the land for 5 minutes."

"Beware of the man who speaks in hands" they say, the Shadowy figure can be found in the far South of the Devil's Palm leaning behind a rock pillar, by

interacting with him he will say the following,

"A failed experiment happened to me and i gained these abilities, you can harness the same powers as me. do you want to achieve that power of mine?"

After agreeing he will give you the following quest, "Obtain Gaster"

Another important and useful NPC besides the Stand Storage NPC is Enrico Pucci who resides beside a bus stop. If you ask him about Heaven while

having either of the stands Whitesnake, C-Moon or The World he will give the following quests.

Made In Heaven Quest :-

Seller of arrows and a weird glowy Bone, the Shop NPC resides in a small Shop near the football field.

if you interact with IB0NI he will ask,

Alterntatively if you choose "No..." he will only reply with 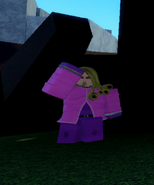 His actions are pure and those of justice tho 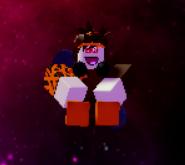 IB0NI asks if you fart