Made in Heaven (MiH)

“The time for Heaven, has finally arrived.” - Enrico Pucci

Even though Made in Heaven's Tier is C Tier, this stand could possess greatly insane power, back then, it did, but up to now it doesn't anymore; but you still have the ability to accelerate time and go faster.

Eventually, Made In Heaven doesn't have any passives.

Made in Heaven (メイド・イン・ヘブン Meido In Hebun) is the final evolution of Enrico Pucci's Stand, Whitesnake and C-Moon, featured in Stone Ocean. Made In Heaven is a canon stand that's one of the strongest stands in the JoJo Universe, being 3rd Place & 2nd Place due to Golden Experience Requiem and The World Over Heaven.

Made In Heaven is a medium-ranged and close-ranged stand stand that has the ability to accelerate time, reset the universe, control the gravitational forces on Earth, Moon, and seemingly the entire universe.

Made in Heaven is a powerful close-range time controlling Stand. Although its physical abilities may not be the best of the best, its control over time grants it an overwhelming speed advantage and even counters abilities that function with a time limit like Star Platinum's time stop due to time stop being actually just slowing down time mih counters this by speeding it up.

Made In Heaven will receive a related stand named Heavy Weather. HW's Ability is to nearly control the weather all over Earth. The user of Heavy Weather is Domenico Pucci (Weather Report).

SA (Spoiler Alert ?): Enrico and Domenico are twin brothers, sought to separate in a manner that would least harm his sister.

Made In Heaven has non-canon evolutions and variants, and they are:

Made On Christmas Eve

Made in Heaven is obtained by using a DIO's Diary on C-Moon. 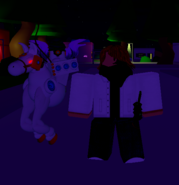 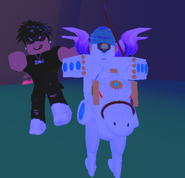 Made In Heaven: Light Speed Barrage

Made In Heaven: Quick Chop

Made In Heaven: Accelerated Knives

Made In Heaven: Throat Slice

Made In Heaven: Time Acceleration

Made In Heaven: Number Counting

Made In Heaven: Light Speed Travel

Made In Heaven: Shift
Add a photo to this gallery

Made In heaven + Bread = Made in Walmart

Made In heaven + Duality Orb = Made in reality.

Made In heaven + Crystal Gem = Crystallized

Retrieved from "https://a-universal-time-roblox.fandom.com/wiki/Made_In_Heaven?oldid=55680"
Community content is available under CC-BY-SA unless otherwise noted.