A Universal Time Roblox Wiki
Register
Don't have an account?
Sign In
Advertisement
in: Stands, Canon, Evolutions,
and 9 more

"You were two steps too late... user" —Enrico Pucci

Made in Heaven's value is an A tier stand. This stand has low combo potential due to it's attacks being hard to aim and the amount of moves with knockback.

This stand doesn't have any passives.

Made In Heaven is the final evolution of Enrico Pucci's Stand, Whitesnake and C-Moon, featured in Stone Ocean. Made In Heaven is a canon stand that is one of the strongest stands in the JJBA Universe.

Made In Heaven is a medium-ranged and close-ranged stand, a stand that has the ability to accelerate time extremely quick, reset the universe, control the gravitational forces on Earth, Moon, and seemingly the entire universe.

Made In Heaven is a powerful close-range time controlling Stand. Although its physical abilities may not be the best of the best, its control over time grants it an overwhelming speed advantage and even counters abilities that function with a time limit like Star Platinum's time stop due to time stop being actually just slowing down time MIH counters this by speeding it up.

Most Made in Heaven players are serious when they use Made in Heaven. If you can't do anything about their combos, you'll be finished in seconds.

Made in Heaven is obtained by interacting with Pucci, and selecting the "The Way To Heaven" option with C-Moon, you'll receive a quest from Pucci. The quest you get from him is: The Way To Heaven.


Once you're done with the quest, you'll automatically respawn with Made in Heaven and be accompanied with sparkles when you recieve it.

C-Moon + Dio's Diary = Made in Heaven

(Above is the obtainment method in the Old Universe)

Made In Heaven's Block

Made In Heaven's appearance in the Stone Ocean Manga 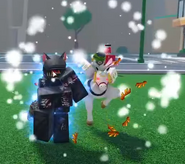 Made in Heaven Summon Effect and Idle

Made In Heaven Universe Reset For New Universe

Made In Heaven's user in Time Acceleration

Made in Heaven User Idle

Made in Heaven without a player in screenshot 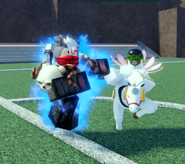 Made in Heaven's counter pose 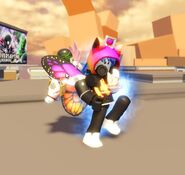 Made in Heaven's Pose

Made In Heaven - Made On Christmas Eve - Event 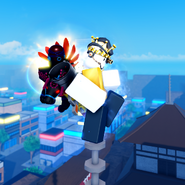 Made In Heaven - Made in Rainbows - Legendary