A Universal Time Roblox Wiki
Register
Don't have an account?
Sign In
Advertisement
in: Stands, Evolutions, Non-Canon,
and 4 more

Made In Reality (MIR)

Obtained by using Duality Orb on Made In Heaven.

Made in Reality is a powerful close-range time controlling Stand. Although its physical abilities may not be the best of the best, its control over time grants it an overwhelming speed advantage and even counters abilities that function with a time limit like Star Platinum's time stop due to time stop being actually just slowing down time mih counters this by speeding it up.

However, its main interest for Pucci isn't its time power, but the ability to bring about a new universe with extraordinary properties.Acceleration of the universe causing it to explode and become a entirely new one.

For original version, go to this page.

His pose music is night of nights

You can obtain MIR by using a Duality Orb on Made In Heaven.

increases your walk speed, decreases cool down for all moves and cancels timestop and renders user invincible ( broken ) for 20 seconds has a CD of 45 seconds or 30 seconds upon dying.

Create a portal at your location that you can return to at anytime by pressing C again, note however, that the portal will close itself if unused for 60 seconds, CD will only start if the user returns to the portal and has a CD of 10 seconds.

Blink forwards in the direction you were facing, has a CD of 4 seconds.

Glide through the air for a maximum of 5 seconds at high speeds, has a CD of 9 seconds.

X - Block: Reduce all damage, The maximum length is forever unless you stop holding X. CD of 1.5 seconds.' [Y - Teleport:]-

Teleports behind a player if you point a mouse to them and press Y. CD of 9 seconds. 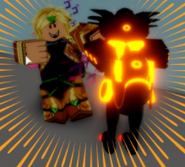 Made In Realities Pose (Old Model)