A Universal Time Roblox Wiki
Register
Don't have an account?
Sign In
Advertisement
in: Items, Status effect, Non-Canon,
and 2 more

Gaining a Stand Arrow from interacting with it

Arrow Meteorites are interacted with to obtain Stand Arrows with a guaranteed chance. It is also used to obtain Planet // Shaper with a 5% chance with standless equipped.

Meteor is a special structure that spawns every 7.5 minutes in the Space dimension and has a 1/10 chance of falling down to the surface. If you have screen shake on, your screen will shake. They despawn at a random rate, so you could sometimes have the sky filled with them or none at all when waiting for a long time.

To obtain the effect you also have to break the Meteor with Zenith or Goku's Mastered Ultra Instinct.

The Meteor effect doesn't wear off when changing stands, so you can utilize Zenith, MUI, Star Platinum Requiem (SPR), and Drip Goku and to fly up to Meteors in space and then change to Crystallized if you obtained the effect.

The effect does however wear off if you leave the server, and does not stack.

Broly next to an Arrow Meteorite 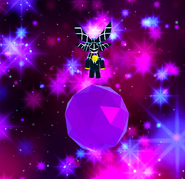 Meteor in the old universe 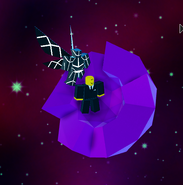