A Universal Time Roblox Wiki
Register
Don't have an account?
Sign In
Advertisement
in: Stands, Non-Canon, Evolutions,
and 2 more

Alu_Dev (A former co-owner Of AUT)

Nuclear Star is a non-canon close-ranged stand based on a Dubstep song of the same, "NUCLEAR-STAR" made by Camellia. The stand is non-canon meaning it does not come or associate with the JoJo Universe. Either way, it is fast and has more control over its power, unlike its counterpart Crystallized. Both of their skill sets are identical but their special moves are different. In the tier lists, Nuclear Star is D tier in rarity and B Tier In PVP. (Old Rarity is A tier)

Nuclear Star is obtained by using arrows that you can obtain from Meteors.

Player and Nuclear Star posing in the old map 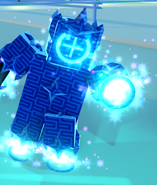 Screenshot Of Only Nuclear Star In Its Pose 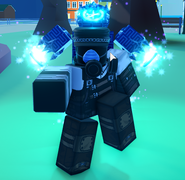