A Universal Time Roblox Wiki
Register
Don't have an account?
Sign In
Advertisement
in: Evolutions, Customs, Non-Canon,
and 4 more

Project Samurai is a very strong specialty. It is rather fast and useful in certain situations.

As a child, Yasuo believed what others in his town said about him. In the best days, his very existence was a mistake of judgment. At worst, it was a mistake that could never be undone.

As with almost everything that hurts, there was some truth to it. His mother was a widow who was already raising a young son, when the man who would be Yasuo's father came into her life like an autumn wind. And, like that lonely time, it was gone again before the Ionian winter cloak settled on the little family.

An Ionian of deep resolve, Yasuo is an agile swordsman who wields the air itself against his enemies. As a proud young man, he was falsely accused of murdering his master—unable to prove his innocence, he was forced to slay his own brother in self-defense. In time, his master's true killer was revealed, and his brother mysteriously returned from death, yet Yasuo still could not forgive himself for all he had done. Now, he wanders the world with only the wind to guide his blade.

PROJECT Samurai on a building 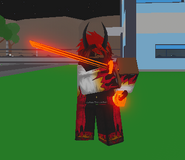 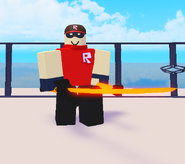 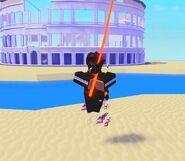