The Requiem Arrow is an arrow that has came from another arrow, "Stand Arrow (AKA MYSTERIOUS ARROW". It has an shape of the regular Stand Arrow, but, has a Red Virus Bug in the middle of the arrow's shape, yellow, and white outline. It's also very short due to being broken in Part 5, Golden Wind.

Requiem Arrows are used to evolve your stand to its true power (Only works on GE, press J to evolve into GER after using Requiem Arrow on GE) 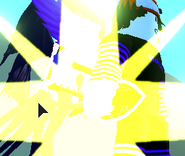