"It's a beautiful day outside. birds are singing, flowers are blooming... on days like these, kids like you... Should be burning in hell." —Sans

Sans is the brother of Papyrus and a major character in Undertale. He first appears in the forest after the protagonist exits the Ruins. He serves as a supporting character in the Neutral and True Pacifist routes and as the final boss and heroic antagonist in a Genocide Route. Sans is A Tier in Tier List. Sans is also a Universal Ability, just like every spec in-game. As of now, Sans has no Japanese Translation. Sans acts evil when fighting him during a genocide route the actual game, After killing his little brother Papyrus and his friends. There are other variants of sans in other UNDERTALE AU's, or alternate universes, he has different personalities, attributes, emotions, etc, one of them you is Cross sans who is fused with X-Chara. Sans is obtainable, but he got nerfed. (Rework Done for New Universe.) You may also notice that Sans deals karma damage in Undertale but no such mechanics are in the game yet.

Sans is especially good against stands/abilities that have an opening strike before a more powerful series of strikes, such as beatdowns or Nocturnus's Crash and Gnash Slashes, as he can dodge the opening strike and avoid the move altogether.

Sans is banned from the 1v1's gamemode. It is unknown whether this is due to the End move being bugged in 1v1s, the Bad Time collision glitch or some other reason. Sans was unbanned recently, but was rebanned after about 2 days. It was said that Sans will be unbanned when he gets fixed, but the recent poll states that Sans will stay banned. It is not known if this is saying that Sans would be fixed but banned or Sans is getting a nerf or Sans will just stay the same and be unbanned.

Sans is obtained by using a Bone on Standless.

Sans is obtained by finding and using a Bone on Chara.

When using the Bone on Standless Megalovania starts playing...

Megalovania continues to play for a while. 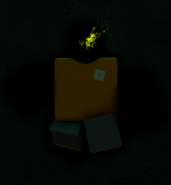 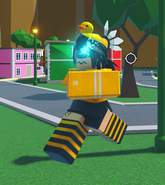 The Miss effect when Sans get hit. 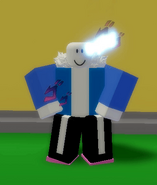 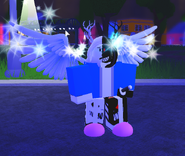 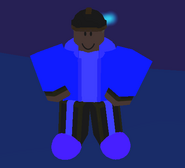