Shadow Dio (邪悪の化身ディオ, Ja'aku no Keshin Dio lit. Evil's Incarnation Dio) is an alternative version of DIO from before the final showdown in Cairo. He is one of the six hidden characters in Heritage for The Future.

A mostly neon pink ghostly type stand, very bright,and oxygen tanks on its back and has no legs, and where the legs should be are a few broken bits of the stand. It has a helmet with tubes attaching it to the Oxygen Tanks. This stand does not have a stand form. Though Shadow the world or stw will appear when you pose or when you press g.

You can obtain this by using Camera on Vampiric The World (VTW in short).

This stand is interesting. This opens up a lot of combo potential, especially if you are good at the game. If used right, this stand and its variants (FSTW (futuristic shadow the world), SW (shadow weeboo), and SL(shadow legs) "unobtainable now") can deal devastating damage. However, this stand possesses many weaknesses as well. Shadow Dio is a "glass cannon" which can deal immense damage but can't take a hit itself, and it's R move has low knock back meaning it can be punished on hit. His crouch moves are also more situational than his standing moves because of his low speed when crouching.

These combos apply to Futuristic STW, Shadow Weaboo, Cosmical DIO and Shadow Legs as well, They share same movesets but different health and damage. Shadow legs is currently unobtainable as of 2/18/21

R + E + Z (only if they are knocked far, if not walk over to the opponent) + C + B (This combo is technically infinite only if used properly) 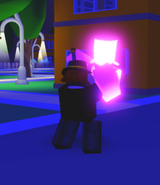 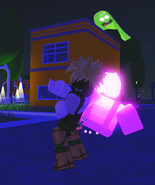 Heritage For The Future: Character Bar Appearance in HFTF

Shadow DIO JoJoban
Add a photo to this gallery

Retrieved from "https://a-universal-time-roblox.fandom.com/wiki/Shadow_The_World?oldid=55246"
Community content is available under CC-BY-SA unless otherwise noted.