watch 04:21
Wiki Targeted (Games)
Do you like this video?
Play Sound

The Spin is a state of rotation defined by its closeness to perfection, that perfection being the Golden Rectangle (黄金長方形 Ōgon Chōhōkei), more specifically the Golden Spiral that is derived from the Rectangle, a mathematically endless spiral, and a feature said to be omnipresent in the surrounding nature and a fortiori in works of art. Unlike the average rotation, the Spin is persistent and produces more rotational energy than it takes to create. That rotational energy is transferred to nearby objects in the form of vibrations and can be wielded for a wide array of purposes. The Spin is a specialty of the Kingdom of Naples. It is intensively used there either for medicine or for battle. All characters who know the Spin are either Neapolitan or have been taught by a Neapolitan. This spec is obtained from the shop for only 150k! However it is broken at the moment so it is practically unusable.

Your body has acquired the ability to repair itself.

The user charges up their spin into their right arm, and strikes it down upon their target, dealing a superior amount of damage.

The user chucks a steel ball from either their left or right hand (E meaning their left and R meaning their right) that can be aimed in direction you facing. Once a ball connects, it will deal moderate damage to the target.

Similar to its Q, the user shoves their left arm forward and plunges it into the opponent, spinning their insides while also delivering an incredible blow.

This is it, your final move, show em what you can do! The user unleashes 5 steel balls and throws all of them at once.

This is getting a rework.

The Item version of this is used to make TA4

Spin's quote.
Add a photo to this gallery 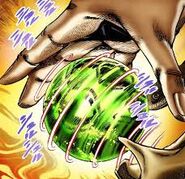 Gyro using Spin (Steel Ball)
Add a photo to this gallery
Retrieved from "https://a-universal-time-roblox.fandom.com/wiki/Spin_(Spec)?oldid=60595"
Community content is available under CC-BY-SA unless otherwise noted.