"I’m tired of hearing that things are impossible or useless. Those words mean nothing to us." —Kujo Jotaro

Star Platinum (often shortened to "SP") is the Stand of Jotaro Kujo. It's a close-ranged Stand, and is one of the first Stands to be shown in the JJBA series, teased at the end of Battle Tendency, and later on appearing in Stardust Crusaders. It will later on appear as a supporting character in Diamond is Unbreakable and Stone Ocean. In-game, Star Platinum is a close-ranged Stand with powerful and quick moves. Although it is powerful, and fast, it is not very good in value, It is C Tier in value, tied with Arrow Stands such as Shadow Dio and King Crimson. Star Platinum can also be evolved to Star Platinum The World when taking Jotaro Kujo (Part 6)'s quest with the Mysterious Hat.

Star Platinum takes the appearance of a muscular humanoid Stand with purple skin and wavy black hair. It wears black gloves with gold accessories. It wears a red scarf, guards, a loincloth, and short boots.

Its face possesses many humanoid features, such as the eyes, a nose, and a mouth. Its body is muscular with gold wavy lines running down the muscles. 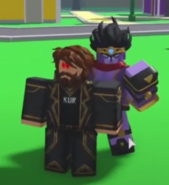 Kur and Star Platinum in the New Universe Sneak Peek. 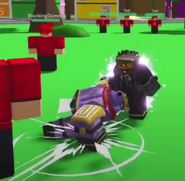 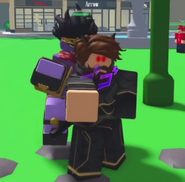 The Hat that appears when attacking with Star Platinum. 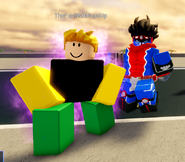 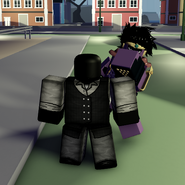 Star Platinum in the manga

Star Platinum's Stats in the Anime