"Upon a closer inspection... Good grief, what an ugly watch. But you won't have to worry about that anymore. Because your face is going to end up... even uglier" —Kujo Jotaro

Star Platinum: The World is the stand of Jotaro Kujo, an ally of Josuke Higashikata in JoJo's Bizarre Adventure: Diamond is Unbreakable.

Star Platinum / Star Platinum: The World (Often shortened to SP:TW) is a humanoid Stand, resembling a tall, well-built man of similar proportions to Jotaro, if not more muscular. In colored art, its skin is often a hue between purple, blue, green, and small bits of gold. Its face and body have varying colors.

It has long, flowing hair with a darker shade above its eyes and on the bridge of its nose, blurring the distinction between its hair and head. The spaces under its eyes and on its cheeks and chin are a darker color and divided clearly from the space around its nose and mouth. It wears a cap on its chin, and a metallic headband in three pieces, the central piece of which is shaped as a vertical ellipse. Initially, its facial features were very similar to Jotaro's.

In the anime and film adaptations of Part 4, all of Star Platinum's clothing, such as its red scarf and black gloves, become white, reflecting Jotaro's own transition from black to white apparel. Its darker purple highlights, such as those under its eyes, also become lighter.

Step 1: Star Platinum: The World is obtained by speaking to Jotaro Kujo (P6), you'll need to obtain Star Platinum and you have to find a Mysterious Hat.

Step 2: Return to Jotaro Kujo (P6) with a stand like his and the lost item in your inventory; he'll give you a quest to train your stand.

Step 3: Return to Jotaro and talk to him and then you will obtain Star Platinum The World. 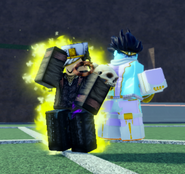 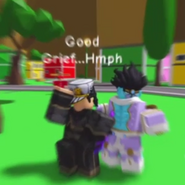 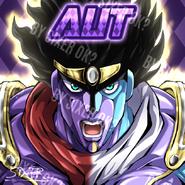 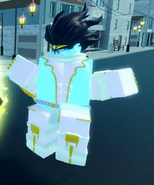