"You fool! You shall soon know... ...that The World's true power is, indeed, the power to reign over this world!" —DIO

The World is a B tier stand, as of right now in A Universal Time.

The World has a lot of canon and non-canon variants, since the game is called "A Universal Time".

The World also has an Alternate Universe (AU) Version/Evolution that's canon, and somewhat not canonical at the same tinimoves), that is known as: The World HV/AU.

Complete Him Quest and use Vial of Joestar Blood with Shadow DIO equipped.

The World has Grey Skin and mostly yellow accessories, with some Jade Hearts on them.

The World is an humanoid stand and canon stand in the JoJo's Bizarre Adventure (JJBA) Universe. It has Grey Skin, Yellow Abs, Yellow Lower Crown Of Egypt, Yellow gauntlets, Orange/Red Eye's (Hazel In The Anime), Yellow Belt with Jade Color on the center of the belt, Yellow Armored Leggings with Jade Knee Pads, Yellow Straps, Yellow Shoulder Pads, 2 Oxygen tanks On His Back, and more. 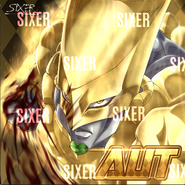 SIxer's Drawing On THE WORLD Rework

The World in the Manga

The World's Remodel (Made By Ancient_Fruit) 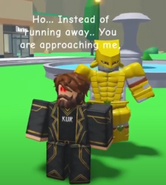 The World’s Final (?) Remodel for The New Universe

The World in Shop

The World and a user on a mountain 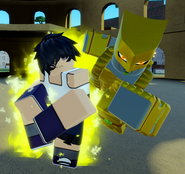 The World Pose in colosseum 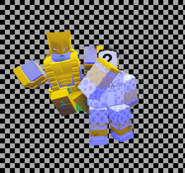 The World Pose with a checkmate background 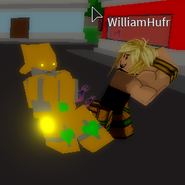 The World's Old Model and Pose 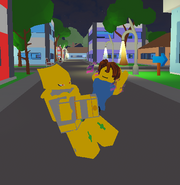