"This ability has far surpassed a simple nail… it’s a Tusk. From now on I will call this Tusk." —Johnny Joestar

Tusk Act 1 is the fundamental Act known of Tusk Act 2, 3, and 4. It's the stand featured in the Anime/Manga Part: JJBA, Part 7: Steel Ball Run Though, this stand's tier is C Tier in trading, but people overpriced this stand's rarity once it came out because of Tusk's Rework. Tusks ability is to shoot out nails. The user of this stand is Johnny Joestar, the main protagonist of Steel Ball Run.

Tusk is tradeable, but the Acts don't transfer. Your own Tusk Acts save, but doesn't transfer to the other person you traded with, Do not scam others with this method

Tusk Act 1 resembles as a small pink bird, with a few yellow stars on its forehead and 2 marked smaller stars on the ears, eight wavering vestiges, pinkgrey beak/cone, blue/purple eyes, 2 pink arms, 4 leg-looking stuff on the bottom of TA1, 1 Huge Star on TA1 and a medium-sized star on his bottom

Tusk Act 1 is obtained by finding and clicking on a orange-yellow crystal on the desert island therefore named "Devil's Palm". 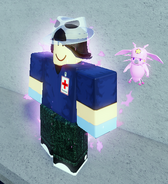 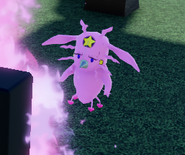 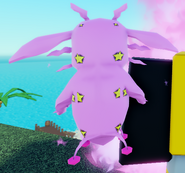 Back of Tusk Act 1 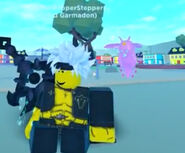