A Universal Time Roblox Wiki
Register
Don't have an account?
Sign In
Advertisement
in: Unobtainables, Trade Locked, Specs,
and 3 more

"Foolishness, user . Foolishness. Might controls everything. And without strength you can not protect anything. Let alone yourself." —Umbra

Umbra has the appearances of a katana with a neon pink blade and gray handle with a purple aura covering the player and sword.

Umbra can't be obtained in New Universe anymore, it's permanently trade-locked and one of the rarest unobtainables, with the only way to use it being to get lucky in (the now defunct) URF One for all gamemode.

Phantom Blade was obtained by using Holy Diary on Anubis. 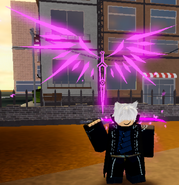 "Vergil" from DMC, who Umbra is based off.