"I'm going to obtain the way to Heaven! Celebrate it... what was born here is Heaven itself. Celebrate the dawning of the new world...!" —Enrico Pucci

Whitesnake is the Stand of Enrico Pucci, featured in JoJo's Bizarre Adventure, Part 6: Stone Ocean, otherwise called Part 6 and shortened to SO. Whitesnake is a close-ranged stand, and must be within 2 meters from its user. Although, Whitesnake does have some ranged attacks.

Whitesnake has GΔCT all over the stands body, it is DNA, since the stands power is to take something away from you, which can be DNA.

The A Universal Time Whitesnake has received a rework and was unavailable about a month before its rework.

This stand is obtainable by using Stand Arrow on Standless (4% chance). 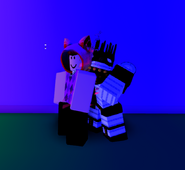 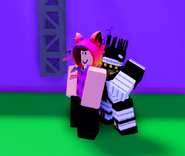 White Snake Idle with a user

White Snake is a relatively melee stand that requires close combat in order to deal heavy hits of damage. White Snake has mainly melee moves, but has 2 ranged moves, one being a long ranged heavy hitting bullet, while the other being a shorter ranged poisoning attack. In general, White Snake is dangerous up close, but can easily be countered by staying out of melee range. Due to most of his set being melee or requires the enemy to be close to him (Example: Sleep, Heavy Punch, Barrage) in order for him to deal the most damage.