"Long before blades and sorcery are needed, words... can save a soul." —Yone

Yone is the older-half brother of Yasuo (Yasuo was a original spec in AUT Old Universe (Yasuo in old universe was called Samurai/PROJECT Samurai). Both Yone and Yasuo are from League of Legends. Yone can transverse the spirit and return to his mortal form.

In life, he was Yone—half-brother of Yasuo, and renowned student of his village's sword school. But upon his death at the hands of his brother, he found himself hunted by a malevolent entity of the spirit realm, and was forced to slay it with its own sword.

Yone is a dual-wielding swordsman which wears a red demon mask/helmet. Yone wears white bandages on his lower arms and half his torso, covering his hands with the bandages.

Talk to the Umbra NPC and complete the quest.

Upon killing the boss you will get one of two items. The Ancient Sword (For Yasuo) and Azakana Mask (For Yone).

After getting an item you need to talk to the Umbra NPC who will give you the spec accordingly to your item. 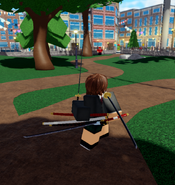 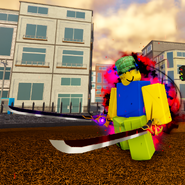